Hit enter to search or ESC to close

Patients of African descent who wish to benefit from FUE hair transplant surgery require a more specialized approach compared to other ethnic groups. Individuals of this demographic tend to have two distinct anatomical differences that often stand in the way of successful outcomes. These include hair follicle shape and dermal skin thickness and texture. Overcoming both challenges is absolutely necessary to achieve the best success rates for African American hair transplants. This is possible by using the Dr.UGraft Zeus: the first all-purpose FUE device in the world to decisively address the surgical hair restoration needs of African American patients.

Today’s hair transplant methods have come a long way in being able to produce impressively natural-looking coverage. However, conventional approaches do not offer a one-size-fits-all solution for everyone. Their shortcomings are especially clear in the case of most black patients.

Since most black men prefer short, closely cropped hairstyles, strip procedures would not be the best choice for their long-term satisfaction.

Furthermore, many patients of African descent are genetically predisposed to developing keloidal scars. This type of scar tissue is thick, raised and often larger than the original size of the wound. According to the Henry Ford Health System, black patients are seven times more likely to form keloid scars on the head and neck.

As an alternative to strip surgery, today’s patients can choose linear scar free hair transplantation.  This procedure is also known as Follicular Unit Extraction (FUE).  Instead of scalpels, the extractions are performed with tiny punches.  Conventional devices can avoid the issue of linear scars and the formation of keloids in patients. However, they are still incapable of producing the best success rates for African American hair transplants. The limitations of general FUE punches for this demographic are due to the following reasons:

The Issue of Curled Hair Follicles In Black Men and Women

Individuals of African origin have hair follicles with a uniquely curved shape. By comparison, the follicles found in other ethnic groups are straighter. The extent of the hair follicle curl is described in terms of the angle of C. Due to their shape, a more curved hair follicle will be less compatible with general, straight cylindrical punches. And they will be more susceptible to damage by these instruments.

The best success rates for African American hair transplants require the use of specially designed instruments like the UGraft Zeus.

Most black patients tend to have thicker dermal tissue in their scalp. This makes it more difficult for a hair transplant punch to penetrate without exerting a stronger downward force. However, doing so will incur the risk of misaligning the device and damaging the grafts.

The Issue of Stronger Anchoring Tissue Connected To The Follicles

To fully free the donor hair follicle grafts, practitioners have to sever the anchoring apparatus completely. However, in most African descended patients, this connective tissue tends to be stronger and more stubborn. As practitioners apply more force to overcome this issue, they also risk distorting and endangering the grafts.

The Dr.UGraft ™ Zeus for extracting Afro-textured hair follicles makes it possible for all black patients to benefit from reliable hair transplant procedures. Now Dr.Umar, the inventor of these instruments, has evolved his existing technology with new features.

This technology includes the Zeus console with foot pedal, the Nurture handpiece, and the Intelligent Punch. Each of these pieces has been specially designed to adapt to any FUE situation, making it the best of its kind.

Black patients have long been considered a significant challenge for hair restoration surgeons. Although it is possible for some African Americans to attain desired growth and coverage through acceptably low transection rates, efforts to achieve such outcomes with conventional FUE devices is often a hit or miss situation. With the UGraft Zeus, this is no longer the case, as ANY and ALL patients of African descent regardless of the the curliness of their hair or their skin characteristic qualify for a good quality FUE hair transplant finish. The Zeus is the first device to enable this as the first intuitive FUE device and the first One device for ALL FUE scenarios that achieves success in all individuals regardless of skin type, race or hair location. It is capable of delivering shaven and unshaven FUE (long hair FUE) using the same Intelligent Punch and Zeus driver for all FUE scenarios. The practitioner needs not switch punches or acquire extraordinary skills.

Black patients have long been considered a significant challenge for hair restoration surgeons. Although it is possible for some African Americans to attain desired growth and coverage through acceptably low transection rates, efforts to achieve such outcomes often become a hit or miss situation.

Because of Dr.UGraft suite of technologies, it is now possible for doctors to know which tools to use for any black patient to achieve the best success rates for African American hair transplants. All patients of African descent may now success with the re-vamped Dr.UPunch i™. Previously, when older versions of this rotary punch would fail to cut through thicker skin attachments, these patients would then benefit from the Dr.UPunch Curl™. A dependable surgical tool system for African American hair transplant surgeons would, therefore, consist of the Dr.UGraft rotary punch, with the double-pronged, curved non-rotary punch as an additional tool for provider preference.

Click the following button to learn how to become a Dr.UGraft provider

Up until now, patients of African origin would often have to wait across multiple tests and proceedings before they could be confirmed as candidates for hair transplant surgery. This often involved one preliminary test procedure using regular Follicular Unit Extraction (FUE) punches to extract a sample set of follicles in order to note their transection rates. Naturally, some patients would pass while others would fail.

This often involved one preliminary test procedure using regular Follicular Unit Extraction (FUE) punches to extract a sample set of follicles in order to note their transection rates. Naturally, some patients would pass while others would fail.

Black Male Hair Transplant – Before and After

This male patient had undergone two prior surgeries before his Dr.UGraft procedure. He chose strip surgery as his first procedure in which 1000 grafts were removed. However, his results were unsatisfactory with poor, pluggy growth in the hairline and a highly noticeable strip scar on the back of his head. His second attempt at hair restoration was a conventional Follicular Unit Extraction procedure which also used 1000 donor grafts. Unfortunately, this surgery resulted in no growth.

Finally, this patient opted for a Dr.UGraft procedure. A previous version of the Dr.UPunch i™ was used, which was sufficient for extracting a donor pool of 1200 total grafts. 800 were used to restore the hairline, 250 grafts applied to the crown and 150 to cover the strip scar. His desired results manifested at just 10 months following his procedure. 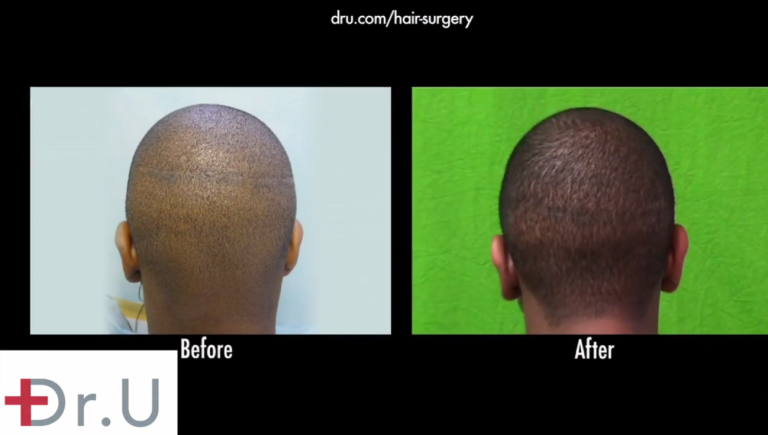 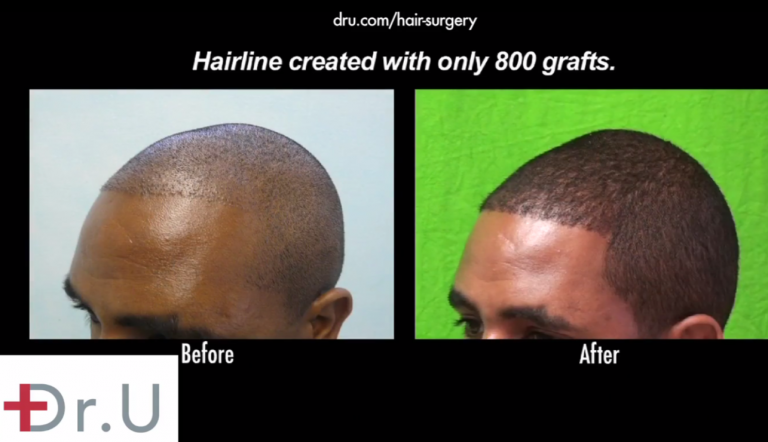 African American hair loss treatment using the Dr.UPunch i ™ to extract donor follicles that successfully grew in for this patient’s hairline, temples and crown *

African American hair loss surgeons now have the ability to produce reliably successful outcomes for black patients with the use of highly specialized tools like Dr.UPunch i ™*

To achieve the best success rates for African American hair transplants, which is the more critical factor to overcome, the shape of the hair follicle or the tissue attachments?

Initially, it might seem that the curvature of the hair follicles presents the largest barrier for successful extractions with FUE punches. However, the toughness of the surrounding tissue is actually a more significant factor that leads to higher transection rates and thus damaged grafts due to the need for the surgeon to apply more force.